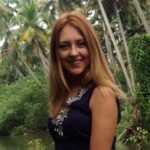 Born in 1986, in Toropets, Tverskaya Region
Liubov has been working at the work shop of a renowned sculptor Gregory Pototsky since 2006.
2007 – 2013 she studied at the Natalya Nesterova’s Moscow Academy of Arts .
The artist’s preferred fields of arts are monumental painting, composition, landscape and still life.