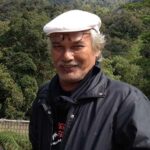 He exhibited works in various local and national evens for more than 20 years. He participated in many invited international exhibitions in China, United Kingdom, India, Taiwan, Singapore, Brunei, Turkey, Indonesia, Thailand and Italy. He has been represented Malaysia in several promotional events such as ‘Malaysia Week in London’, UK. He was invited to conduct art- workshops and talks on many local and international events. He has been selected as jury in many local, national and international competitions. He received several art awards on local and national level. His works are widely collected by public and private institutions such as galleries, museums, corporations and individuals.