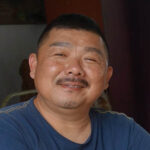 Simon Tan was born in 1967 and is a popular Malaysian artist. His works have been featured in many art exhibitions and festivals, both locally and internationally, since 1991. He has also received public recognition and awards for his work. He was presented with the Young Talent Artist by the Penang State Museum and Art Gallery in 1991, followed by the Beautiful Malaysia Award in 1996, the Tanjung Heritage Award in 2007, and the New Expression Award of Asia Art in Henan, China in 2008. In 2014, he won the Excellence Award on two occasions, namely at the 12th China National Art Exhibition for Hong Kong, Macau, Taiwan, and Overseas Chinese and at the 2nd Exhibition of Overseas Chinese Paintings and Calligraphy. He also won the Meritorious Artist Award at the China & Malaysia Culture and Art Exchange in 2015, and in 2016, he was presented with another Excellence Award at the 3rd Exhibition of Overseas Chinese Paintings and Calligraphy.

Tan is also involved in art societies in Penang and Singapore. He served as committee member of the Penang State Gallery from 2008 to 2011 and is a member of the Penang Art Society and the Modern Art Society of Singapore. Some of his artworks are collected and displayed across the world, including the Central Bank of Malaysia, Soka Gakkai offices in Malaysia and Japan, Tuanku Fauziah Museum & Gallery in Universiti Sains Malaysia, Zheng Zhou Art Museum in China, B Braun offices in Penang and Germany, Sori Art Center and International Beokam Museum in South Korea, as well as in Naresuan University Art Center, Poh-Chang Academy of Arts College, and Burapha University in Thailand.