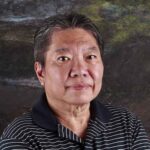 James obtained his art education from 1966 to 1968 at Sir John Cass School of Art, London. After that, he continued his study in Interior Design at Brixton School of Building, London (now known as London South Bank University). In 2002, he took life drawing classes at The Price of Wales Drawing Studio, London.

In 1995, James won Outstanding Newcomer Award by the Royal Watercolour Society (RWS), London. It was the first award for any Asian artist since the Society’s founding in 1804.