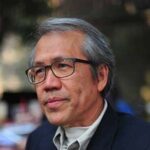 Somsak Chowtadapong was born in Thailand in 1949. When he turned 18, he graduated from the School of Fine Arts, Bangkok Thailand, then pursued a Bachelor of Fine Art (2nd Hon, Painting) at Silpakorn University, Bangkok, Thailand. He then continued studying further for his master’s degree at the same institute. In 1979, he went abroad to get a Diploma from the Institute of Fine Art, Urbino, Italy. He also accomplished a Certificate from Yokohama National University, Yokohama, Japan in 1985. As Chowtadapong possessed a remarkable talent in his field, all his higher education were sponsored by the government of Thailand, Italy, and Japan respectively. In early 2018, Somsak was announced by the Deputy Prime Minister of Thailand for being conferred with the title of National Artist in Visual Arts (painting) of Thailand 2017. Somsak has also held many governmental positions throughout his career. In 1997, he was the Director of Nakhon Si Thammarat College of Fine Arts, Ministry of Education. Then, in 2003, he was assigned to be the Director of Art Center, Office of Contemporary Art and Culture, Ministry of Culture in 2003. Somsak gained a promotion to be the Deputy Director and then to Inspector General two short years later. Alongside his administrative work, he is also the winner of various awards in Thailand, Japan, and Iraq. Since 1983, many of his solo and group exhibitions have been successfully held in Thailand, Japan, Geneva and recently in Malaysia and Switzerland.