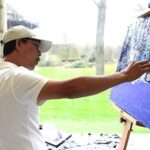 Peter Liew is one of Malaysia’s leading plein-air artists who works entirely with oil and paints landscapes and cityscapes exclusively.
Bringing one on a spectacular journey covering many of the world’s cities. Peter Liew captures the majestic beauty and life of these creations through his bold strokes, vivid colours and his signature impasto textures, characteristically applied with his skilful use of palette knives. It is these confident applications that lend his works a three-dimensional quality, creating a remarkable visual impact.
Central to the success of his vision are his interests in both landscape and heritage. Nature, in Liew’s mind is the greatest master of ethereality while heritage for him is central to cultural identity. Through his paintings, he searches for people’s heritage and marks of nature’s timeless presence among the robust strokes in his paintings, so full of force yet display such aesthetic sensibility.
Peter Liew’s works are vastly coveted by collectors around the globe. Throughout his career, he has been invited to exhibit his works in numerous galleries and museums both nationally and internationally, specifically in Asia and Europe. He is also an active participant in major international art fairs.