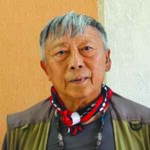 Goh Beng Kwan was born in 1937 in Medan, Sumatra. His father was a Chinese immigrant and his mother was a Peranakan. His family migrated to Singapore after the end of World War II in 1945. He received education at the Chinese High School and was tutored in art by artists Chen Wen Hsi and Cheong Soo Pieng.

In 1962, Goh travelled to USA to study at the Art Students League of New York. He studied oil painting under Sidney Gross, before leaving representational painting behind for Abstract Expressionism. He was awarded the Allen Tucker Scholarship and the Ford Foundation Scholarship. In 1964, he met Leo Manso and Victor Candell at the Provincetown Workshop in Massachusetts. He began creating abstract painting-collages by integrating Chinese artistic principles with Chinese calligraphic strokes. In 1965, he had his first solo exhibition at the Ruth Sherman Gallery and another major solo exhibition in San Diego. He returned to Singapore in 1966 and organized his first solo exhibition in the National Library. During his time at the Singapore Tyler Print Institute in 2006, Goh created an innovative “water collage” technique with Richard Hungerford. He continued to exhibit his artworks at various exhibitions and events abroad and locally for the following decades. He held and participated in other exhibitions and art workshops internationally, mostly in Southeast Asia. Through all the travelling, he gained inspirations and insights for his artworks, bringing out his art to be in the form of tapestry, glass and ceramics.

Various organisations such as the Singapore Art Museum, Changi Airport, United Overseas Bank (UOB), Bank of America, Deutsche Bank, Westin Hotel and other collectors have collected his artworks. His other artworks are displayed at Conrad Centennial Hotel, May Bank, Punggol MRT/LRT station and the Singapore Turf Club. The major awards that Goh had received are the first prize in the inaugural UOB Painting of the Year Competition in 1982, the first prize at the Australia Business Council and Australia High Commission Art Awards in 1984, the silver medal in the Salon des Artists Francais in 1985, and the Cultural Medallion in commendation for his artistic achievements in 1989 by Ministry of Culture Singapore.