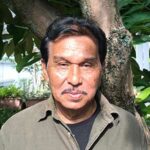 Abd Rani Majid was born in Raub, Pahang, Malaysia in 1959. He started to produce works of art for exhibition since 1981. He studied printmaker at Curepipe, Mauritius. He held Several Exhibition in Malaysia, Thailand, Mauritius, Japan, Reunion Island (France), Paris (France), Bali, Indonesia, Hangzhou, Xitang, China, Calcutta (India). The works of Rani distinguish themselves by the great spontaneity, showered by the state of jubilation in which he restores in his canvas. The latest series must be seen, “Siri Unggas, Wayang Kulit” and Fantasy a taste from naivety to be contemporary-nurtured by sing and symbols, very particular to his country, Malaysia.