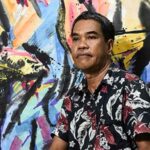 Muhammad Rojana-Udomsat is a well-known artist in Thailand. Muhammad graduated from the Pho Chang Art College in 1959 and worked in the Faculty of Medicine or the Prince of Songkhla University in Thailand. In 1996, when the Siam Art Museum was formed in Hatyai, he helped the museum to organize and promote art activities. In the same year, he made a significant move by bringing the Southern Art Group together to exhibit in Thailand. He was also selected as a representative for Thailand to attend an international watercolor show and conference in Tattori, Japan in 1997

Muhammad has produced a number of wonderful artistic works. He likes to paint nature, life, and creation. His paintings and techniques form their own characters – beauty and colors that are fresh and modern. He has also participated in solo and group exhibitions in Thailand as well as in other Asian countries, namely in Malaysia, Taiwan, China, and Japan. His hard work was recognized and publically acknowledged when he was honored as a distinguished artist of the Songkhla Province of Thailand in 2004.